September's Heroines Drop included a beautiful miniature by RN Esudio from their Mythexplorers range - this line of detailed male and female models features miniatures from many different historical periods, ideal for fantasy gamers. Nadia is a Holy Warrior from the time of the Crusades, and comes with her mighty War Hawk which aids her in battle and gives her character extra bonuses.

To complete the Heroines Kit for September, we featured an intricate Ancient Base from our friends at Micro Art Studio, which mirrors the old temples Nadia would have come across during the Crusades. Alongside the base we also included a pair of basing bits to set up camp - a detailed shield from Alien Labs and a coal pan from Tabletop Art.

Finally, the trio of paints we featured were some blues from the Reaper Bones paint line - a bright and bold triad that is perfect for painting rich fabrics, like Nadia's cloak.

If you like the sound of Sepember's box, you can sign up for the Heroines Box by clicking this link. 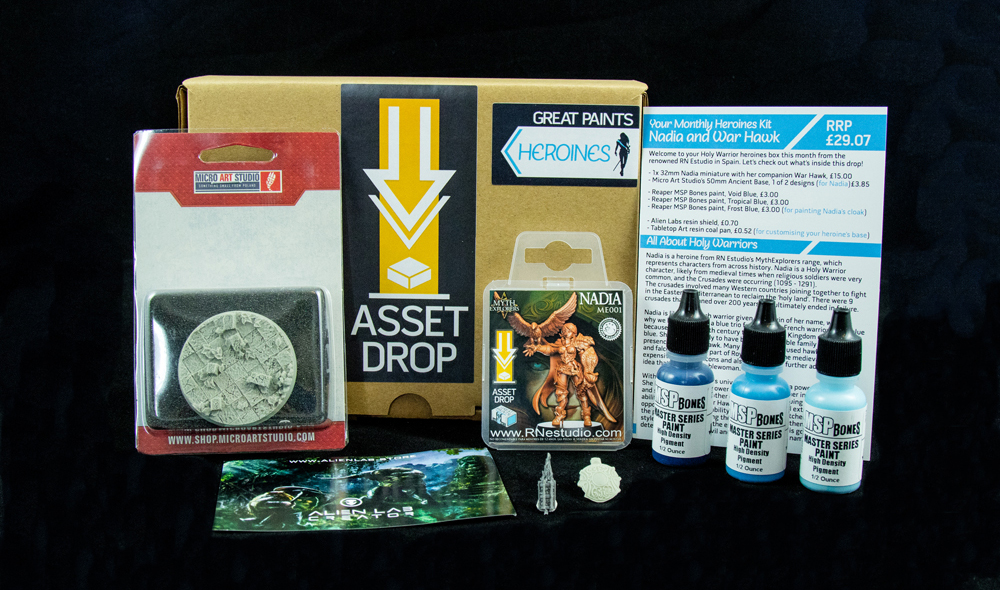 September Mini Tutorial:
Inside every heroines box, we always include a detailed painting tutorial designed around the mini that month. For September's tutorial we covered how to paint Nadia's blue cloak for a realistic but contrasted look, ensuring it will really pop on the tabletop! 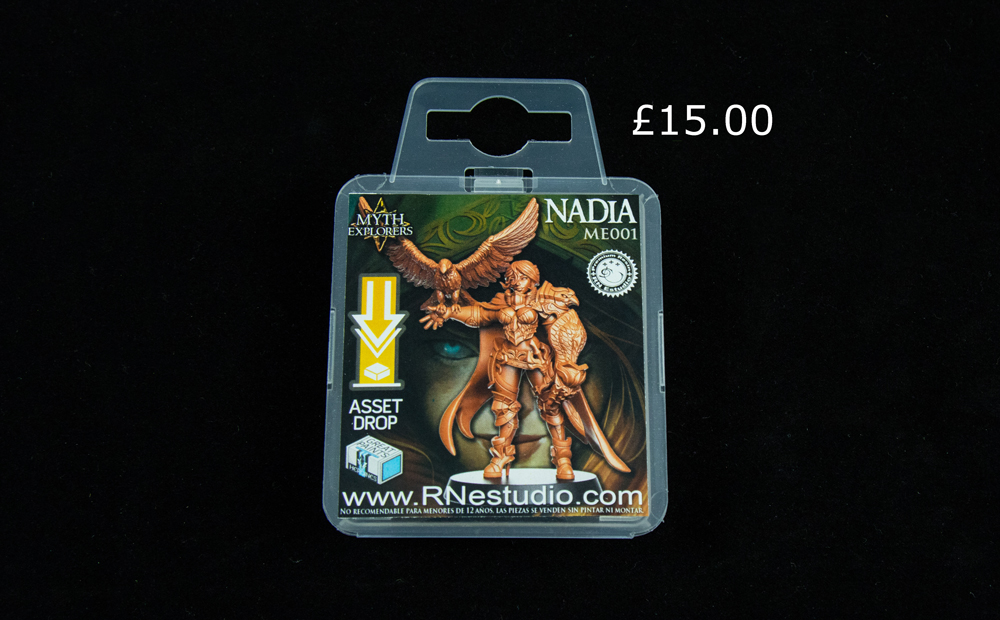 Nadia is a heroine from RN Estudio’s MythExplorers range, which represents characters from across history. Nadia is a Holy Warrior character, likely from medieval times when religious soldiers were very common, and the Crusades were occurring (1095 - 1291). The crusades involved many Western countries joining together to fight in the Eastern Mediterranean to reclaim the ‘holy land’. There were 9 crusades that spanned over 200 years and ultimately ended in failure.

Nadia is likely a French warrior given the origin of her name, which is why we provided a blue trio for her cloak. French warriors wore blue because during the 12th century the Flag of the Kingdom of France was blue. She was also likely to have been from a noble family due to the presence of her War Hawk. Many noble families used hawks for hunting and falconry was a big part of Royal culture in the medieval era. It was expensive to train falcons and also very skilled, further adding to the idea that Nadia is a noblewoman.

Within the MythExplorers universe, Nadia is also a powerful warrior. She is bolstered by the power of her faith, giving her increased strength and speed compared to other characters, and imbuing her with celestial
abilities. Her faithful War Hawk is also able to deal extra damage to opponents in battle, an ability that isn’t too far-fetched, as Falconer’s of the past would often bring their birds to war with them. As a Holy Warrior-style character, Nadia is the embodiment of what is good and righteous, determined to destroy evil and seek justice in the name of her faith.

Check out the completed dioramas below, painted by our Heroines Drop subscribers! 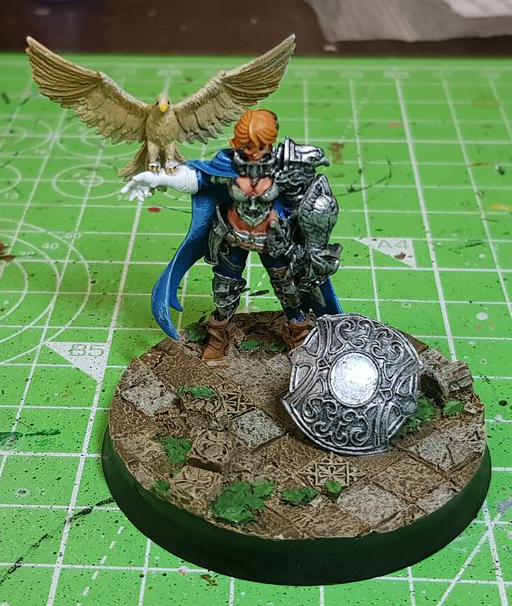 Painted by our subscriber Michael of Denmark 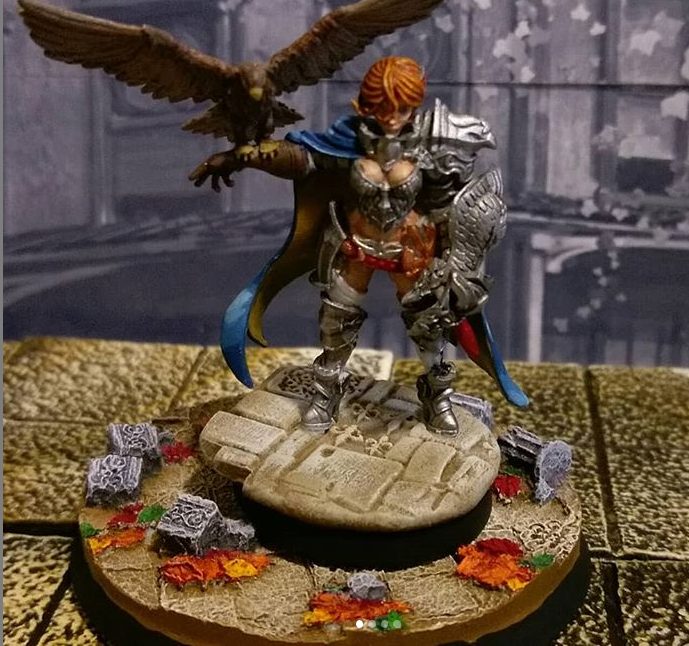 Painted by our subscriber Noah of the USA

Ancient Base and Basing Bits 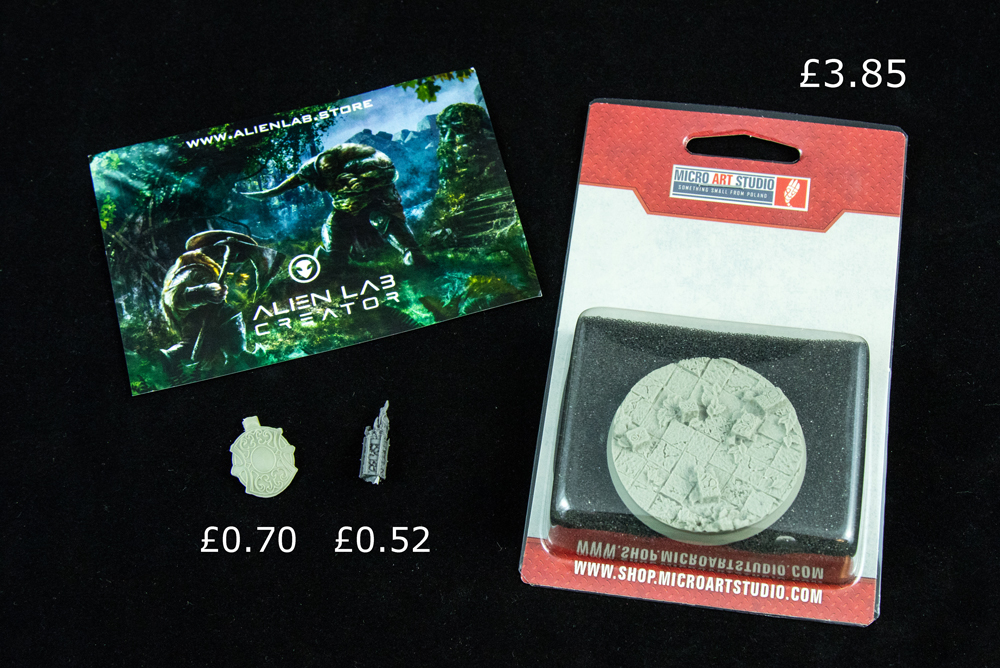 To display Nadia and her War Hawk we chose a stunning Ancient Base by Micro Art Studio. The crusades often took place in the Mediterranean and there would have been many ancient temples across that landscape.  The ornate detailing on the base complements how detail Nadia is perfectly.

We also included two different basing bits to add to the temple base. A beautiful medieval shield by Alien Labs, a fantastic resin producer from Poland, and a coal pan from Tabletop Art, another brilliant company from Germany. These two basing bits could be added to the Ancient Base to add more detail and story to the diorama - perhaps Nadia was resting for the night in an old ruined temple before continuing on her righteous journey?

A Trio of Reaper Bones Paints 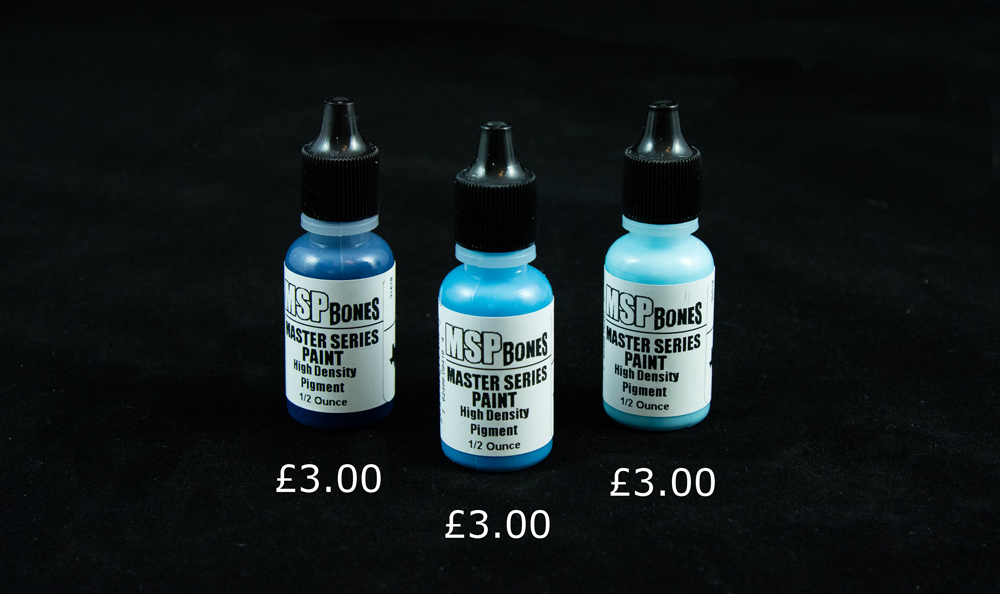 For the featured paints in this month's drop we chose one of our favourite brands - Reaper. They have an incredible range of colours, all in handy trios, and all very high quality. The Bones range of paints are thicker paints, like their HD line, but include brighter and bolder colours. This blue trio is absolutely stunning, with rich colours that really pop on the miniature. In the free painting tutorial included in every Heroines Drop, we covered step by step how to use this trio to paint Nadia's flowing cloak.