Community Members Talk About Their Hobby
- Frank B, USA

In this series of blog posts, we'll be talking briefly to some of our subscribers to find out how they got into the hobby and what they love about our subscription boxes. We'll also be sharing pictures of the models they've painted and how they approached the challenge.

How did you get into the hobby, and what do you enjoy about it?

Frank: A little sadness wrapped in happiness. I started painting minis when I was 12. My mom bought me my first box of GW Chaos Dwarves after my father passed away that Christmas. My father was a creative person, an artist with both a pen and a welder. My mom was a "paint by numbers" painter and I ended up getting a little of both.

Now that first group of Chaos Dwarves were absolute hot garbage! I still have most of them though. I've given away a couple here and there over the years... I'll run into a painting bully picking on a kid who's paint job is just as bad as mine were so long ago. Twice I've shown the kids what I'm doing now and what I originally did... because yeah I still carry my Chaos Dwarves with me everywhere I go. So I've given these guys out and told the kid, "look at this, it's trash, but look at this" and given them a Battletech Shadow Hawk that was nicely painted, and said "with enough hard work, one day you can paint like this."

About 2 years ago I was at a local convention and a guy walks up to me as I'm sitting painting, sees my trash Chaos Dwarves and says "you know, with enough hard work you'll get better." I laughed politely and said "gee, thanks for the tip, I'll keep that in mind and keep working!" At which time the guy pulls from his box this horribly painted Chaos Dwarf with too much paint and no details left on it.... puts it on the table in front of me, reaches back in and puts down this nicely painted Shadow Hawk and I tear up a bit and begin to laugh uncontrollably.

My buddies look over and ask what is going on as I jump up and give this now 16yr old kid a giant hug. I asked his name and said it has been a long time since I've seen these guys. He replied "yeah it's been a few years, but they and you helped me get past my fathers passing."

We traded stories and I came to find that the day I gave him those miniatures was his first trip to the game shop after his father had passed, which was only a few months after his father had gotten him into painting. We've traded minis a few times since. So what do I enjoy about painting... relaxing and smiling when the bad times get tough 🙂 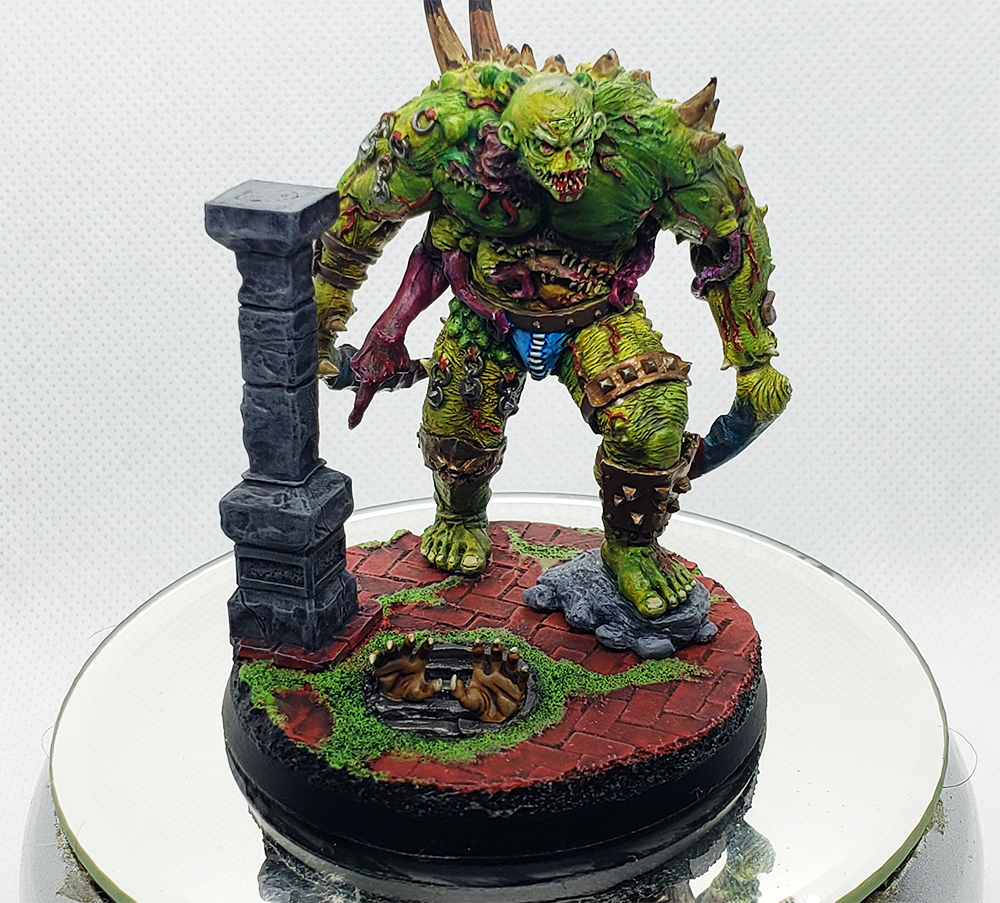 We love the Humalkas diorama you created using July's Monsters Box contents. How did you approach it?

Frank: The Humalkas was beautiful when I pulled it out of the box. When I pull a mini out of the box, the first thought is "what can I do with the base to really show this guy off?" Mind you, I do this with every mini, so painting an army takes forever and a day, but every mini has a thought and story behind it.

For this guy he was imposing, fearsome, and maniacal. I saw the giant scythe hands and first thought grim reaper.... but that gruesome smile made me think of the joker from the Batman TV show (granted I watched it in reruns as a kid but I got that joker behind bars thought in my head).

So I had a big guy with a prison scene, and then thought "but this guy would never be caught, he would be putting people in jail." So now I start calling him The Jailer. I turn to look at my bitz box, full of bases, and I see the March Heroes Box base with the bars over the cellar...ding ding "we have a winner!"

I plopped him on there and it just looked great.... but he didn't seem
"big enough" just yet. I found the stone column from the Heroes Box in my other bitz box and it was shorter than he was.... but wait, that's perfect.. he towers over it! As I was digging through the box (dumping it on my desk to make a huge mess), I saw some orc arms leftover from a GW kit, and thought it would be great to see the hands sticking out of the grate.

Enter the trusty eXacto knife and off came the hands! Color wise, I
just wanted the hands to stick out, hence painting the nails such a
stark white. The green, well... come on, he's an incredible hulking
mass of muscle, so I picked incredible hulk green with mixes of yellow and brown underneath to make the top coat show shading.

What do you think of the Asset Drop subscription boxes?

Frank: The greatest thing about the Asset Drop boxes as a whole to me are that they provide something that I may not normally buy at my local game shop.. or might not even find at the local shops.

I subscribe for the variation and value inside the box. A mix of paints, minis, and bitz that I may not normally get, but when I use them they create a mini diorama on each of my bases and bring each of my minis to life.

That exposure to those items almost forces me to try different techniques that I don't use all the time or that I find challenging and I outright avoid, because the instruction guides are written so well. The subscription has helped me develop and fine tune my skills ever since I signed up.... my only regret is that I missed subscribing to the first two core boxes back in 2017. Lastly, the candy is absolutely wonderful!! 😉

Here are more amazing diorama's that Frankie has created using his monthly boxes! Frankie subscribes to the Discovery Box, the Heroines Box, the Heroes Box and the Monsters Box. You can follow him on Instragm @grraystorm 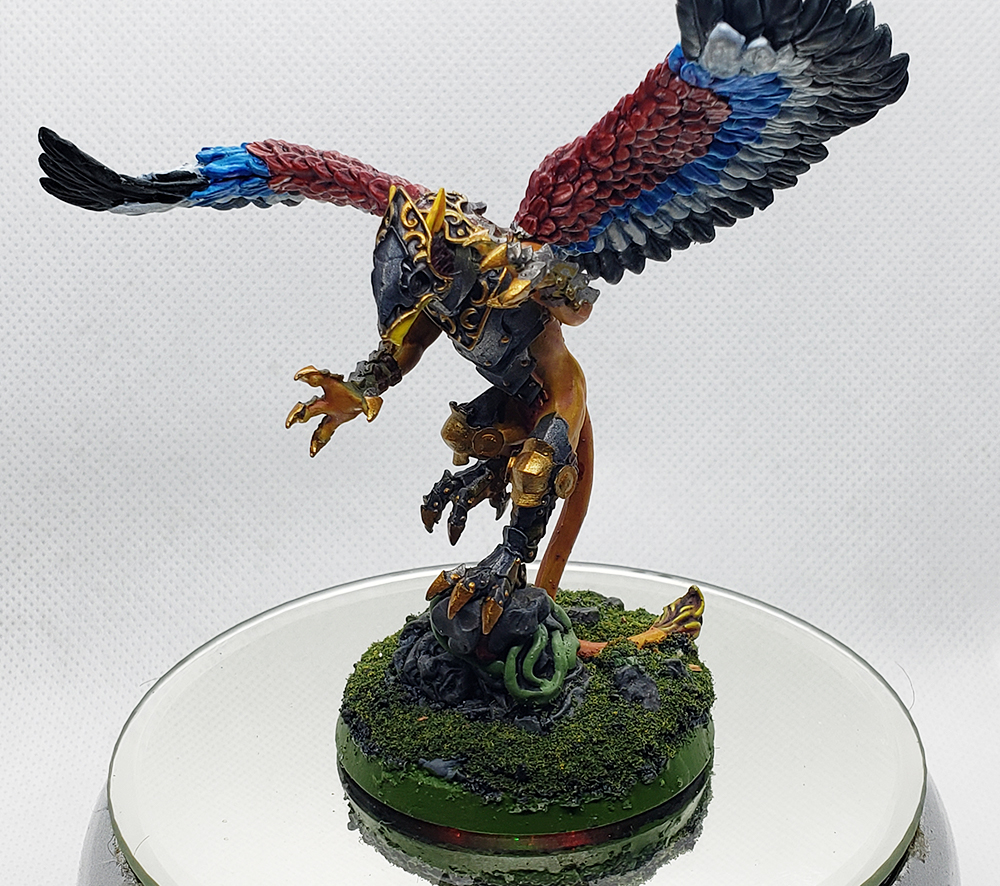 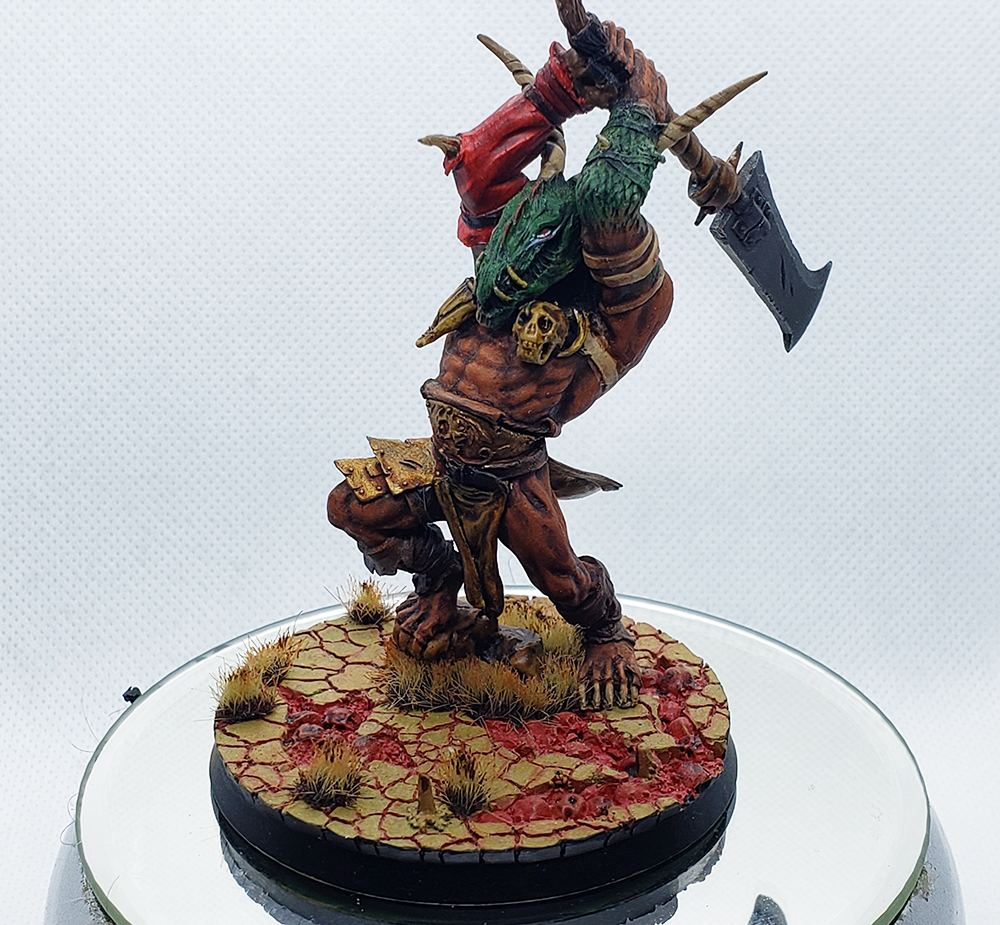