An Interview With Francesco, Art Director at Kimera Models

This is an interview with Francesco Farabi, the Art Director at Kimera Models and co-creator of their Kimera Kolors paint range. We were lucky enough to speak to Francesco for our Discovery Box Painting Guide because we featured three of the KK paints in March's Discovery Box. We asked Francesco 5 questions and received a very detailed response back on the science behind his paints. We hope you enjoy this fascinating read! 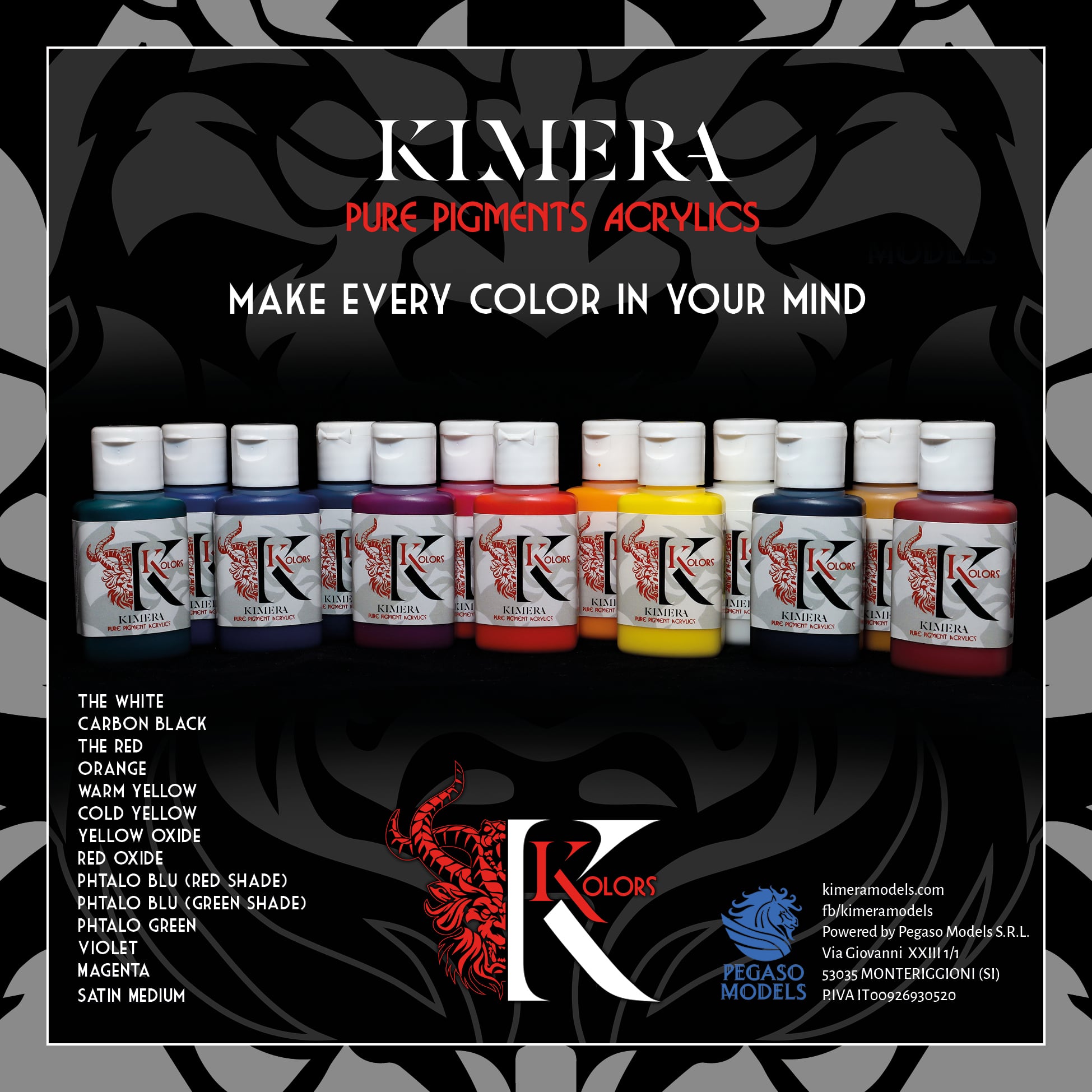 Please note some parts of this interview have been edited slightly for clarity, as English is Francesco's second language. Thanks again, Francesco for taking the time to speak with us!

Andy: What was the inspiration behind designing the Kimera Kolors range?

Francesco: the inspiration is simply the fact that we are, first of all, painters like you: we know what we want from a paint and we know what's difficult to find on the market. There are a lot of incredible brands of paints created for modellers, but what's harder to find is a paint with the same strength as a pure artist color, without the issues that make them hard to use for miniature painting i.e. the consistency, the coverage in thin layers, the glossy finish.

The main point of our creation was: can we get the same benefits of real artists paints (the best quality pure pigments and the capability to mix well), while maintaining the good aspects of miniature paints? And every day this is still what we aim for!

Andy: How do Kimera Kolors differ from other miniature paints? What do people gain by adding them to their paint collection?

Francesco: A) They have only one type of pigment in each bottle. This means they react in a very predictable way, and when you mix them together or with another paint line, you achieve a very powerful and vibrant color, without turning it greyish. This way you can mix Kimera Kolors with your existing paints to make them a lot more saturated and powerful. The KK paints are primary pigments, with the highest chroma possible. With them you can mix to achieve every hue of any traditional paint line or you can use them to skyrocket the power of the paints you already use!

B) They have the highest amount of pigment percentage that we've found in any acrylics on the market. It ranges from 30% to 50%, instead of the usual 9-20%. This means they're so much more powerful and can cover a lot without the addition of any white in the mix (many miniature acrylics have white mixed in their colors to have better coverage).

Also, you can dilute them a lot and use them with the airbrush just fine because of this reason.

C) They have extra fine pigments and are matte paints, with the option of adding a satin medium as needed to assist you in the glazing process or to make the paints less matte. The paints are fluid and they combine very well with heavy body acrylics to enhance their coverage, fluidity and saturation.

D) Kimera Kolors are a selection of 13 single pigment paints and a satin medium that will cover the vast majority of your needs. They come in a 30ml bottle size (double the amount you're used to!) with an agitator ball already inside. The paint range has even been tested by a variety of world famous miniature artists! You can out more about our paints here. 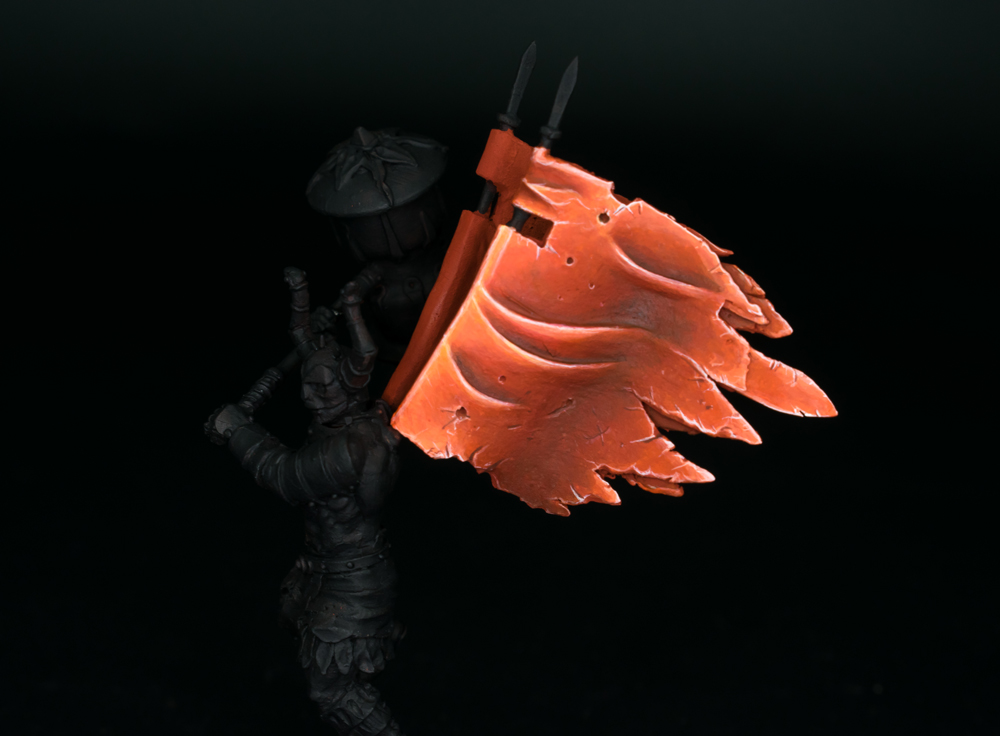 Andy: What is the best way to use Kimera Kolors? Do you have any tips to help our subscribers get the best out of them?

Francesco: There is no best way to use them, they act as an 'all-in-one' box or a perfect 'mixing tool' in connection with other brands in your collection. In particular, we really recommend to mix them with the colors that you normally use. Not only because this way you can have different and interesting results, but in particular you can introduce “pure pigments painting” into your normal painting flow (mixing them on the palette with the other paints you already use), with no stress or 'shocks', learning day by day the best way to master them.

Andy: What thinning ratios would you recommend for using the Kimera Kolors with an airbrush?

Francesco: Because Kimera are really pigmented you can dilute them more than a normal paint, but there is no default ratio to use. The only important tip we give to you is to always put a little bit of water or thinner in the airbrush before adding the paint, because of the heavy pigmentation they can seep directly to the needle and clog it.

Andy: Is there anything else you would like people to know about your Kimera Kolors paint range?

Francesco: A lot of people have asked us what the difference is between our paints and traditional paints; “What’s all the fuss about pure pigments?” I would like to try and clarify everything here, but keep in mind this is a long read and still just an overview of a vast and interesting topic!

Let’s start by defining some key terms: tint, tone, pigment, color and hue can be used interchangeably , so let’s keep it simple and use conventional definitions:

In color theory, based largely on light spectrography, we understand that there are three primary colors that can't be divided. If added together in various ways they give you every hue of the visible spectrum of light. To be even more precise, our eyes have photoreceptor cells that perceive some of the spectrum of the light; specifically reds, blues and greens. By subtraction, they therefore understand the presence of every other color. For example to get a yellow, the red and green photoreceptors need to be stimulated to the maximum at the same time, and the eye then has to understand that there is no blue in there. If this happens, the brain tells us that we are seeing is yellow.

However, we know that primary colours in art aren’t red, green and blue (like for the human eye) but red, yellow and blue. Why is that? The reason is because of pigments! You can’t subtract pigments like our brain does all the time with light, you can only add them together. For this reason, in medieval times, they discovered that by adding yellow and blue together you can get green and after a long time, in the last century, we came up with the notion of primary colours. So - our conventional primary colours are the primary red (very similar to Magenta), primary yellow (something like a lemon yellow) and primary blue (a cyan). Colors that can be used to make any color by adding white and black to get tints, tones and shades.

However, this only works in theory because the harsh reality is that pigments are chemical products. After various processes they can become a specific hue, not because you are mixing different colors. This happen because they are treated chemically in order to profoundly modify their structure and thus their hue.

For example: the color Raw Sienna. If we have to describe the hue of Raw Sienna we would say that it is “an orange brown that goes towards the yellow, with medium luminosity” (it’s not a perfect definition but it should give you the idea). Now if we were to mix this color using primary colors (color theory based on how light works, not how pigments work), Raw Sienna could be created by mixing  yellow, red, white, a little bit of black and maybe a tiny bit of blue… If we try for a while, and if we are really good, we could get that hue. However, we had to mix FIVE colors to get here! Whereas if we ignore traditional color mixing, we could instead use Iron Oxide; a single pigment that works in a specific way to have exactly the same hue as Raw Sienna.

On your palette those two colors (the mixed one and the iron oxide pigment) could have exactly the same hue, but their internal composition would be dramatically different. This will be very evident, not only in their properties of opacity and dilution (different, not better or worse), but especially when we mix them with other paints. That's because one of them is a pure element ready to incorporate into other elements, but the other is a mix. In the mix, some pigments will be stronger than others, and so will change hue in different ways. What’s important to understand here is that a pigment is not an abstract concept like a primary color, but a physical material with its own characteristics different from the other pigments e.g. more or less coverage, shiny or matte, more or less dominant in a mix, more or less resistant, etc… 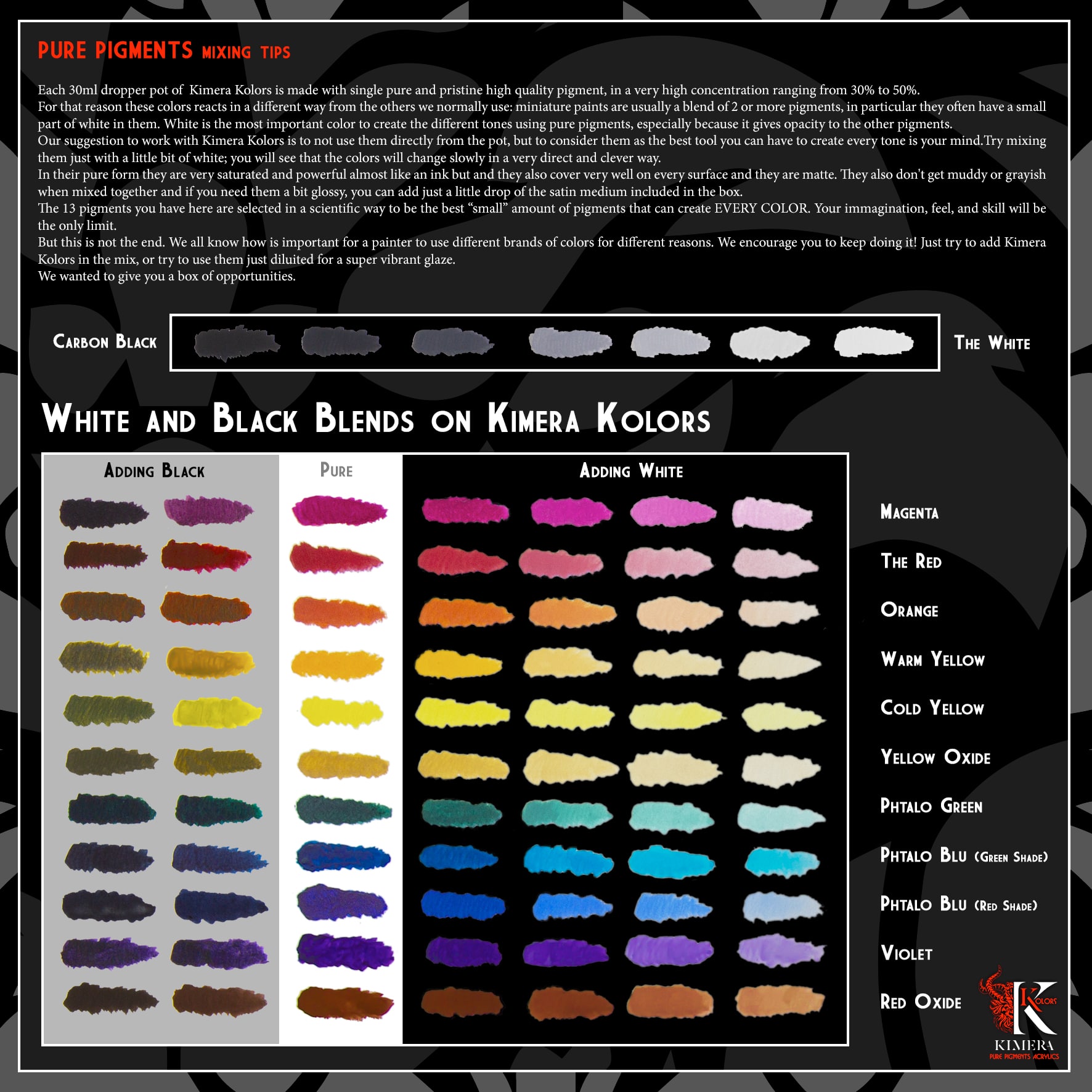 Not only this, but black is not actually a pure black (the absence of light) but instead is a very dark pigment that can have a little bit of blue or red inside it. When you mix black pigment into your colors, you will shift them little bit in that direction too. It's the same with white as well. There are in fact five or six different whites (Titanium White, Zinc White, etc).

Starting with Johannes Itten, every artist at all ages studies the properties of pigments and how they react in a mix, which is what we did in order to create our Kimera Kolors range.  So let’s go back to the concept of primary colors and try to reach a temporary conclusion. The primary blue, or cyan, is a specific hue. If you Google it and look at it, you’ll notice it's a medium blue, not too dark or too light. To get that cyan hue, you have to mix a blue pigment (usually Manganese Blue) with a white, because right now there isn’t a single pure pigment with that hue anywhere on the planet. So what will happen if I mix my cyan blue creation with a primary red? Will I get a majestic pure purple? NOT IN THE SLIGHTEST! You added white (which can have different undertones) to the mix to get Cyan, and so your purple will not be a pure purple.

This is why working with pure pigments (single pigments with no white or black in them) lets you mix by using the pure hue of the pigment you have to make the hue that you want, without any unexpected results. Pure pigments offer you a huge range of possibilities, with the strongest saturation possible due to our high pigment density. The philosophy behind Kimera Kolors is that we aren’t telling you to throw away the paints you already have, but to use them to expand our horizons when we paint. We see them as a new possibility, unprecedented in the miniature world. They are made to reach results very hard to achieve with traditional paints, but in a simpler way!

To check out March's Discovery Box, which featured Kimera Kolors, head to the unboxing article here.